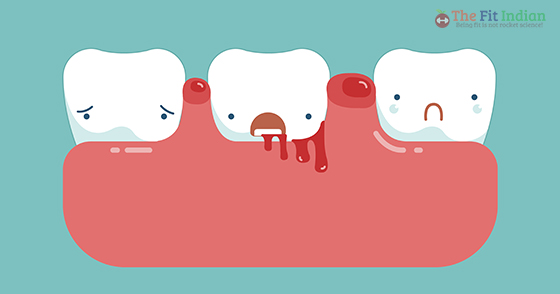 Bleeding gums always remind me of the advertisement on television, a girl biting into a green apple and her teeth leaving a bloody trail on the fruit. Ouch! Looks and sounds scary, doesn’t it? You know what is scarier still? Spotting blood in your sink, after you spit out, post brushing. Ah, your bleeding gums have their own saga to narrate. Bleeding gums may not always show a sign of an acute gum problem but sometimes may indicate the onset of a gum disease. So, you should not just stop at taking care of your pearlies but you must also ensure that your gums stay healthy and strong. Before we start worrying about what home remedies to follow, try and find out the causes first and then we will look for the remedies to stop bleeding gums.

So why do you suffer from bleeding gums? There are reasons galore, a few of them being,

The most common signs of bleeding gums to watch out for are the following,

What is the first thing you can do if you notice the above symptoms? The immediate step to take is certainly to maintain good oral hygiene and try and get rid of the plaques naturally. Can you really get strong and healthy gums with home remedies for bleeding gums? I will suggest to try out a few of the remedies mentioned here and then judge for yourself, if the bleeding gums do not show any signs of receding, you must knock the door of a reputed dentist in your vicinity.

We suggest some natural remedies to treat bleeding gums easily.

Coconut oil has natural healing properties and is one of the most effective ways to treat bleeding gums. Coconut oil is also anti-inflammatory in nature and helps reduce the inflammation in the gums. It also has antimicrobial properties that help treat plaque, naturally.

Take a tablespoon of pure cold-pressed coconut oil in your mouth and swish it around for 10-15 minutes. Try this at least once daily.

Tea tree oil has potent antiseptic and antimicrobial properties, which can keep infections at bay that leads to bleeding gums. Its anti-inflammatory properties that reduce inflammation and also minimize the swelling.

Things you will need

Combine a few drops of tea tree oil and a teaspoon of coconut oil. Massage the mixture on the gums. Let the mixture stay on the gums for several minutes and rinse away thoroughly. Do this twice a day for best results.

Clove oil has phenolic compounds such as eugenol, which imparts anti-inflammatory and antibacterial properties to it. Clove oil also has natural analgesic properties. Clove oil is, in fact, a highly effective solution to treat bleeding gums and gingivitis.

Blend clove oil with coconut oil and apply this on your bleeding gums. Leave the mixture on the affected area for 10-15 mins and rinse away. Try this home remedy at least twice a day for best results.

Salt water has fantastic anti-inflammatory and antiseptic properties, which helps reduce inflammation and swelling and fight infections that lead to bleeding gums.

Add a teaspoon of salt to a glass of warm water. Blend well, then rinse your mouth with this effective saline solution. This is a simple remedy and you can repeat this at least twice or thrice a day.

The tannic acid compound in tea works wonders on bleeding gums thanks to its anti-inflammatory and antibacterial properties. This stops the bleeding and also kills the bacteria, the very source of the condition.

Steep a tea bag in hot water for a good 10-15 minutes. Remove the tea bag and allow the solution to cool. Place the tea bag directly on the gums and let it stay for at least 5 minutes. Do this at least once or twice a day.

What is it about this pungent hot pepper that makes it such a potent force? It contains a compound called capsaicin which has great pain-relieving properties. Cayenne also helps lowers down inflammation and the swelling of the gums. It has antibacterial properties too and stops microbial infections from proliferating, which make your gums bleed.

Wet your toothbrush, and instead of toothpaste use cayenne pepper to brush your teeth. A hot and spicy substitute for your mundane toothpaste. Try this at least once or twice a day.

Lemons are a boon for us chiefly because of its antibacterial and anti-inflammatory properties. It keeps bacterial infections at bay, the ones that causes your gums to weaken and bleed. It also speeds up the healing process as it reduces swelling and bleeding.

Squeeze the juice of a lemon and add it into a cup of water. Use this solution to rinse your mouth after every meal.

Oil pulling is the super cool rediscovered health fad that’s great for your health. We say rediscovered because it is been an ancient Ayurvedic practice and it is only recently that people are endorsing it with a spirited glee. Of course, it has enormous benefits, as it prevents gingivitis and periodontitis that causes gum bleeding. Its microbe-slaying avatar is great to keep your mouth microbe-free. There are several options for oil-pulling such as coconut oil or sesame oil which has exceptional antimicrobial properties.

Put some sesame or coconut oil in your mouth and swish it around for 10-15 minutes. Do this first thing in the morning.

Turmeric is one of the healthiest ways to keep your mouth clean, it helps that it boasts of antifungal, antibacterial, anti-inflammatory and antiviral properties. This helps soothe both the inflammation and irritation in the mouth.

Combine the salt, mustard oil, and turmeric powder and massage the mixture on your gums. Try this at least once or twice a day.

Ginger has a compound called gingerol that has potent anti-inflammatory and antibacterial properties. This has the power to take care of your inflamed gums and treats the infections that cause gum bleeding.

Grate a ginger and squeeze out its juice. Now massage the juice on the inflamed gums and leave it for at least 10-15 minutes. Try this at least 1-2 times daily.

Aloe vera has immense healing powers. It has anti-inflammatory properties too that reduce the inflammation and bleeding. It has antibacterial properties too which help get rid of the oral pathogens that are the main cause of gum diseases such as gingivitis.

Get pure and natural aloe vera gel on your fingertips and apply all over your bleeding gums. You can try this twice or thrice daily.

Baking soda has powerful antibacterial properties that kill the bacteria and is a perfect bleeding gums cure. It also balances the pH in your mouth and helps remove the plaque and stains on your teeth.

Add a teaspoon of baking soda and add it to a cup of warm water. Use this water to rinse your mouth.

Alternatively, you can also use baking soda as a toothpaste to apply on your gums. Do this at least twice or thrice a day, after meals.

You should look for different ways of adding more vitamin C to your diet if you are already suffering from a gum disease. Vitamin C also acts as a preventive step, to stop the onset of a gum disease.

Foods that you should include in your diet are as follows,

If you are unable to get enough vitamin C to your diet, you can also add a vitamin C supplement. It is a powerful antioxidant that strengthens connective tissue and protects the lining of your gums, so make sure you add an ample amount of it to your diet every single day. It is said that adults must include at least 65 to 90 milligrams of vitamin C a day.

Follow these home remedies for bleeding gums and a few preventive tips as well. The tips mentioned below stop your gums from bleeding and keep them healthy.

Other than the home remedies mentioned here, you must maintain good oral hygiene and brush teeth, especially after you snack on sugary and processed foods. Be gentle to your teeth and brush gently, to avoid damaging soft tissues of your gums. There are some foods that you should add on a daily basis such as soy, yogurt, green tea, garlic and so on, that play a role in looking after your gums. Integrate these oral hygiene habits into your daily scheme of things and you will soon flaunt a set of bright pearlies with healthy gums!

11 Best Ways to Treat a Belly Button Infection Naturally at 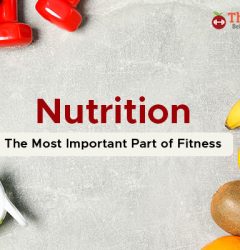 Why Nutrition Is An Essential Part Of Fitness

Top 10 Foods To Avoid During Your Weight Loss Diet – Ignor