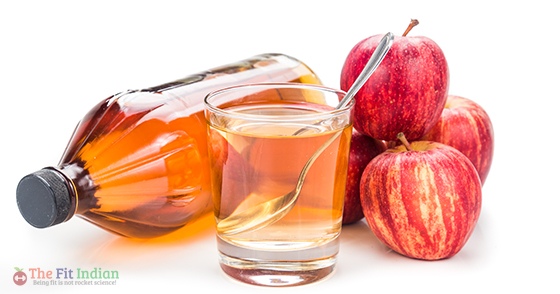 Apple cider vinegar has been around for ages, hailed as the natural solution for most common ailments. But what caught our eye were the startling studies which came up with facts that your humble apple cider vinegar can be used for weight loss and help you drop the excess pounds.

Now out of the millions of remedies available on the net, why is that apple cider vinegar enjoys a prominent fixture in most of the lose weight fast remedies? There is something about apple cider vinegar and we are going to find out why it is so effective for weight loss.

Vinegar is regarded as one of nature’s great gifts to mankind, and if you delve a little deep you will find exactly why it is so. One teeny-weeny fact about vinegar is that any kind of alcoholic beverage, whether it is made from apples, dates, grapes, rice or plain white sugar, when exposed to air, will turn naturally to vinegar.

Vinegar is first said to be used around 5000 BC, when the Babylonians started using the fruit of the date palm to make both wine and vinegar. They used it for preserving their foods and also as a pickling agent. The Egyptians have used vinegar as long back as the 3000 BC.

What is Apple Cider Vinegar?

Apple cider vinegar is made usually with the help of fermentation. The fact that it is fermented, ups its nutrient quotient a notch higher. The apples are first cut or crushed and then yeast is added to it to convert its sugar content to alcohol. The next step includes adding bacteria to kick start the fermentation process and transform the alcohol to acetic acid.

Traditionally, apple cider vinegar production took a month to complete the fermentation process, but because of its increasing demand, the production pace has been increased and now it can be made within a day or two. The chief component of apple cider vinegar is acetic acid. This is known as ethanoic acid, which is an organic compound with characteristic features like a sour taste and strong odor.

How does apple cider vinegar help in weight loss? Well, that is the question that must be uppermost in your minds. Let’s find out whether all that is said about apple cider vinegar is true or a whole lot of balderdash. So, does it really deserve the nutritional crown? Let’s get down to the bottom of nutritional claims that you have been skeptical to accept.

There is some evidence that acetic acid has properties which suppress fat accumulation. ACV can also help you stabilize your cholesterol levels.

ACV flushes the body and helps it to use the nutrients from food in the best way possible.  As it is high in insoluble fiber, it helps absorb toxins and improvethe bowel movements.

And what’s more, their cravings reduced and they ended up consuming lesser calories for the remaining part of the day. Besides the advantage of controlling the pesky hunger pangs, vinegar was also instrumental in slowing down the rate at which food leaves your stomach. You could gauge the impact it has on your eating habits. That is, the fuller you are, the lesser chances of you emptying packets of your favorite snack.

While most of the time vinegar extending the time food stays in the stomach will prove to be a good thing, in some cases it is not so, like Gastroparesis, or delayed stomach emptying, which is symptomatic of type 1 diabetes. If you are taking insulin to control blood sugar levels, timing the insulin with food poses a bit of a problem, since then it will be difficult to find out the time period for blood sugar to rise after a meal. In such cases, ACV can prove to be a deterrent.

The Other Advantages of ACV

Apple cider vinegar is not only great for weight loss but also hasother major health benefits too, thus providing the right reasons to hop aboard to enjoy the ACV ride.

Why apple cider vinegar? Why not any other vinegar? Has this thought crossed your mind? Apple cider vinegar actually has a slightly higher mineral and vitamin content. Since the vinegar is made from apples, it gets to retain its natural antioxidants, essential nutrients and fruit polyphenols, which helps in normal body functions such as digestion and metabolism.

ACV contains pectin, which has satiety properties, enabling weight loss. Between filtered or unfiltered, choose the unfiltered one, which is unpasteurized and also contains the ‘mother’. The mother is nothing than leftover bacteria after the fermentation process, which has plenty of medicinal properties.

Drinking apple cider vinegar straight up can be a throat-burning experience, so dilute it first, but if you think that taste is just too tart for you, don’t worry, you can sweeten it up a little and also kick your weight loss efforts a notch higher. This can help you shed those extra pounds pretty effortlessly. Here is a drink you can try every day, it is pretty doable as it has just three ingredients.

Combine the ACV and honey to a glass of warm water. Just blend well and drink it away.

Now a reality check! Most of the ACV brands available in the market aren’t the one you should be looking for. Choose one which is unpasteurized, unfiltered and organic and also which contains the mother. This kind of apple cider vinegar for weight loss will not only help you drop the pounds, but also help you maintain your health in more ways than one. Since it is high in acidity, it also kills off bacteria such as E Coli.

How to Consume Apple Cider Vinegar for Weight Loss

You love the taste of apple cider vinegar and so you go on chugging on this modern elixir. Well, do you do that? Then you need to stop right there. There is a particular dosage which you need to adhere to; otherwise, your esophagus may get affected.

Instead of downing ACV spiked drinks every day, you can give it a break for a few months and then start off again. Surprising the body is always good!

Steer clear of this vinegar if you are nursing or pregnant. It might then do more harm to you than good.

Now that you have become a fan of this super drink with the tangy bite, try and make it a part of your favorite meals too. We know, chugging on the water with apple cider vinegar may get tedious and boring after a while. And if you can enhance its weight loss efforts, what more can you ask for! Check out these amazing drinks, which can take inches off your waist and make you happier the next time you jump on the weighing scale!

That’s right, you need to take a swig first thing in the morning, but what’s worth noting is that this drink is minus the tartness which you associate with ACV, thanks to the presence of black strap molasses. Black strap molasses are full of vital vitamins and minerals, such as iron, magnesium, calcium, vitamin B6, and selenium.

Stir it together and drink. Wake up to this drink and you will love the taste, along with the benefits of this drink.

This apple cider vinegar drink for weight loss is pretty invigorating and great for weight loss, largely due to the ACV, and also cinnamon. Cinnamon is known for its weight loss benefits too, because of it mimicking the biological activity of insulin. It helps increase the metabolism of glucose too.

Since uncontrolled levels of high blood sugar levels can lead to excessive fat storage by the body, cinnamon helps inhibit this increased storage of fat and helps you knock the kilos. This drink is alkalizing, thanks to the presence of lemon juice. All in all, a great drink to include in your everyday diet.

Blend the ingredients and enjoy!

Get your body into fat burning mode with one of the best apple cider vinegar juices. The fact that it adds cucumber and apple to the juice, makes it a wonderful concoction for weight loss. The celery also adds the right dose of fiber to the drink. The benefits of celery are embodied in the fact that it is an excellent source of antioxidants and beneficial enzymes. Ginger helps in digestion, thus making it an excellent drink for overall health and well-being.

Put the ingredients in the juicer and juice it up.

Add the ACV and cinnamon to the juice. Stir it up and enjoy!

Your early mornings are never going to be the same again with this quick pick-me-up drink. Ginger and turmeric add the right anti-inflammatory benefits. Whenever you are adding turmeric, make sure you add black pepper to it, to ensure its bio-availability. Also, make sure you add raw organic honey to reap the benefits of this natural sweetener. Apart sweet, part tart drink that wakes up your taste buds and with time also helps you to drop the excess pounds. Be consistent and you will undoubtedly see results!

Combine all the ingredients together in a tall glass and add the honey till it is completely dissolved. Drink up!

Remember that just swigging on bottles of ACV is not going to help you drop the pounds. You simply cannot ignore your overall diet and exercise. You have to combine this natural drink with other weight loss efforts. You have to put in a synergistic effort. So are you on team ACV? We certainly are, we are eating our broccoli and running on the treadmill, but in the run up to our weight loss goal, we are not forgetting our apple cider vinegar diet. Make sure you do not too!